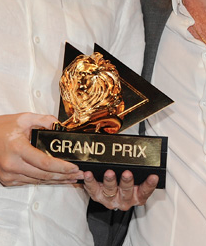 Cannes, 21 June 2011 – The Cannes Lions International Festival of Creativity has honoured the first of the winners at the Promo & Activation, PR and Direct Awards Ceremony which took place in Cannes last night.

Both the Promo & Activation and the Direct Grands Prix went to Romania, the country’s first ever Grand Prix win. BV McCann Erickson, Bucharest took the two Grands Prix for their ‘American Rom’ entry for Kandia Dulce.

Of the 2,125 entries submitted in the Promo & Activation category, a 33% increase versus last year, 175 were shortlisted from which 55 were selected as winners by the international jury led by Warren Brown, Creative Founder of BMF. Along with the Grand Prix a further 5 gold, 17 silver and 32 bronze lions were also awarded.

Of the 1,858 entries submitted in the Direct Lions category, an increase of 29% compared to 2010, 204 went on to make the shortlist of which 10 Gold, 15 Silver and 31 Bronze Lions were awarded. Presiding over the Direct Lions Jury was Alexander Schill, Global Chief Creative Officer & Partner of Serviceplan Group.

Now into its third year the PR category received 819 entries, up 43% from last year. The jury, chaired by Dave Senay, President & CEO of Fleishman-Hillard, shortlisted 105 and went on to award 10 gold, 13 silver and 15 bronze lions. The jury awarded the Grand Prix to Clemenger BBDO Melbourne, Australia for their entry for the National Australia Bank, ‘Break Up’, bringing the total number of winners to 39.

The prestigious Direct Agency of the Year award was won by Ogilvy Argentina, Buenos Aires.

All of the Promo & Activation, PR and Direct Lions winners along with their credits can be viewed online at www.canneslions.com.

Delegates attending the Festival have already experienced an exceptional programme with Seminars coming from goviral; imc² featuring musician Nick Jonas on the panel; Kraft Foods with Author Malcolm Gladwell speaking; AOL with Arianna Huffington; SAWA and thenetworkone. Also on the programme were the dedicated Young Lions Masterclasses, which saw the likes of Paul Lavoie, Chairman & Co-founder of TAXI presenting to a packed audience and Workshops coming from Wunderman, Directory and more.
The 58th Annual Cannes Lions International Festival of Creativity, the largest and most coveted awards in the industry’s calendar is currently taking place in France, attended by over 9,000 industry peers.