Foreign investors are buying up iconic U.S. brands, but the clout of companies everywhere is slipping away. By Moisés Naím

If you want to understand the shifting balance of power in the world econ­ omy, it helps to know the names Jorge Paulo Lemann, Carlos Brito, and Fred­ erico Curado. Lemann, Brazil’s rich­ est man and the dealmaker behind the $52 billion InBev­Anheuser­Busch merger and the $3.3 billion purchase of Burger King, has just teamed up with Warren Buffett to acquire yet another major American company, H.J. Heinz, for $23 billion. Brito, the Brazilian chief executive officer of Anheuser­Busch InBev, has launched a $20 billion take­ over bid for Mexico’s Grupo Modelo—the maker of Corona beer—and in the process prompted a U.S. antitrust suit. (AB InBev already sells almost one in five beers in the world.) And Curado, the CEO of Em­ braer, the world’s third­largest com­ mercial planemaker, recently inked a $4 billion deal to supply American Air­ lines with regional jets.

These Brazilian tycoons represent a new breed of emerging­market entre­ preneurs who are introducing unprece­ dented competition into every sector of global business. Emerging­market coun­ tries are now home to more than 1,000 companies with annual sales above $1 billion. Foreign direct investment from developing and transitional econ­ omies has outpaced FDI from rich coun­ tries for more than a decade. It’s by now widely understood that power is flowing from north to south and west to east, from old corporate behe­ moths to agile startups. But to say that power is shifting from one continent or country to another, or that it’s dispersing among many new players, tells only part of the story. Nor is it enough to attribute these shifts to the impact of the Internet and other disruptive technologies.

Instead, the very nature of the power once wielded by established companies and the people who run them has changed. Rival CEOs continue to fight for dominance, but corporate power itself—the ability to influence the way consumers, competitors, and mar­ kets behave—is decaying. The Brazil­ ian billionaires who now control mul­ tinational giants such as AB InBev are no less vulnerable than the more fa­ miliar names they’ve replaced. In the 21st century, power is easier to get but also harder to use and easier to lose. To many people this trend may seem surprising. In the age of Occupy Wall Street and “too big to fail,” it’s unques­ tionable that income is concentrating and some are using money to gain po­ litical clout. Yet even the 1 Percent in     the average American CEO has declined from close to 10 years in the 1990s to about five and a half years. The position of executives in other countries is just as tenuous. In 2011 alone, CEOs at 14.4 per­ cent of the world’s 2,500 biggest listed companies left their jobs.

The same goes for corporations themselves. In 1980 a U.S. company in the top fifth of its industry had only a 10 percent risk of falling out of that tier in five years. Two decades later, that likelihood had risen to 25 percent. In fi­ nance, banks are losing power and in­ fluence to nimbler hedge funds: In the second half of 2010, in the midst of a sharp economic downturn, the top 10 hedge funds—most of them unknown to the general public—earned more than the world’s six largest banks combined. Multinationals are also more likely to suffer brand disasters that clobber their reputations, revenues, and valuations, as companies from BP to Nike to News Corp. can all attest. One study found that the five­year risk of such a disaster for companies owning the most prestigious global brands has risen in the past two decades from 20 percent to 82 percent.
In some respects, these are heart­ ening developments.

Just as the decay of power in politics has undermined authoritarian regimes, in business it has curtailed monopolies and oligopo­ lies while giving consumers more choic­ es, lower prices, and, in some cases at least, better quality. Even areas in which monopolies were once thought unavoid­ able, such as utilities, can now be opened to competition. Cultural barriers are in­ creasingly irrelevant: To cite just one ex­ ample, Alejandro Ramirez, a young en­ trepreneur from Morelia, Mexico, is one of the leading players in the cineplex business—in India. Ramirez’s company, Cinepolis, began as a one­screen movie house in the 1940s in provincial Micho­ acán state. It’s since become the largest cineplex company in Mexico and Central America and is now seeking to meet In­ dia’s demand for modern multiplexes— there are only about a thousand modern
When power is harder to use and keep, it spreads to an ever-larger cast of small players, creating more opportunities for deceit film screens for more than 1.2 billion people—by adding 500 screens in the next few years.

The growing power vacuum also en­ tails dangers. It’s nurtured all manner of improvised groups, companies, and media outlets that evade traditional scru­ tiny and whose sponsors hide in the ca­ cophony of the Web. It’s also created more opportunities for fraud and deceit. When power is harder to use and keep, and it spreads to an ever­larger, ever­shifting cast of small players, forms of competition that threaten the social good and the survival of industries (overly aggressive business tactics designed to bankrupt rivals rather than maximize profits, for instance) are more likely to arise.

We can’t anticipate the many changes that will flow from power’s ebb, but we can adopt a mind­set that will minimize its more harmful effects. The first step is resisting elevator thinking, the ob­ session with who’s going up and who’s coming down. You can rank competitors at any given time by their assets, power, and achievements. But the picture this offers is ephemeral and misleading. The more we fixate on rankings, the more we risk ignoring or underestimating how much the waning of power is weakening all the competing parties, not only those in apparent decline.

We must also recognize that the decay of power creates fertile soil for those who seek to exploit the prolifera­ tion of actors, opinions, and proposals in ways ultimately counter to the public interest—consider the Wall Street wiz­ ards who championed toxic financial instruments as creative solutions. De­ vising enforceable safeguards to pro­ tect the public will become essential for policymakers worldwide.

In business and politics, the end of power carries risks as much as it pres­ ents opportunities. When national and international leaders are, like Gulliver, tied down by thousands of micropowers, they’re less able to address the most pressing issues of the day—from climate change to economic crises to nuclear pro­ liferation. The fundamental challenge before us is to welcome the advances of plural voices and innovation without driv­ ing ourselves into a crippling paralysis.

Naím, a scholar at the Carnegie Endow- ment for International Peace, is author of the forthcoming book The End of Power. 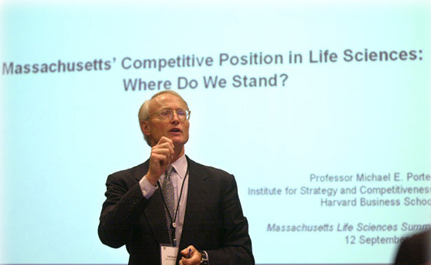