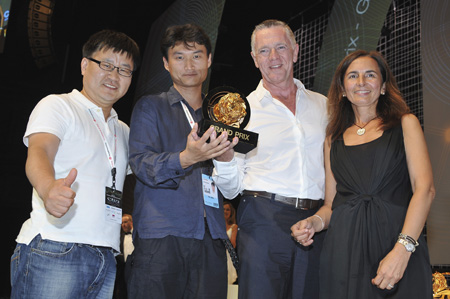 The Media Lions category, which saw a 34% rise in entries this year to 2,895, was judged by a team of international media professionals led by Maria Luisa Francoli Plaza, Global Chief Executive Officer of MPG. 222 entries were shortlisted with 14 winning Gold, 31 Silver and 38 Bronze Lions. Cheil Worldwide Seoul, Korea took home the Media Grand Prix for their entry ‘Homeplus Subway Virtual Store’ for Tesco.

Jung von Matt, Hamburg were presented with the prestigious Media Agency of the Year award during the ceremony. Second place went to Cheil Worldwide, Seoul and third to Ogilvy Argentina, Buenos Aires.

Of the 4,490 entries in the Outdoor category, 424 made it to the shortlist with a total of 119 selected as winners of which 18 were Gold, 33 Silver and 67 Bronze. Two Grands Prix may be awarded in the Outdoor category; one for Billboards & Street Furniture and Posters and the second for Ambient. This year, the jury decided to not to award a second Grand Prix, instead awarding only one in Ambient to an entry that they felt encompassed the spirit of both categories. Droga5 New York, USA, took the Outdoor Grand Prix for the entry ‘Decode Jay-Z with Bing’ for Bing/Jay-z. Olivier Altmann, Chief Creative Officer of Publicis Worldwide was president of the jury.

The Radio Lions jury, led by Eugene Cheong, Regional Executive Creative Director of Ogilvy & Mather Asia Pacific, voted and deliberated on a total 1,363 entries and selected 9 Gold, 16 Silver and 24 Bronze winners from a shortlist of 138. The Jury decided to award the Radio Grand Prix to Net#work BBDO Johannesburg, South Africa for radio ads ‘Bud’, ‘Love’ and ‘Toby’ for Mercedes-Benz.

Also honoured at last night’s award ceremony were the Gold winners of the Young Lions Media Competition which went to the team from Czech Republic. Silver place went to Germany and Bronze to Brazil.

The winning work from these categories is now available to view online together with their credits at www.canneslions.com

Yesterday, participants attended another busy and inspirational day of seminars and workshops which included presentations from Yahoo! who brought Robert Redford for a discussion around storytelling and the technology that fuels it; Hill & Knowlton on what brands can learn from Angry Birds; IPG & Women’s Leadership Network who along with Martha Stewart talked about gender balance in creative roles and Digitas & Vevo with Pharrell Williams on why social and mobile rock the world.

Ongoing events throughout the Festival are the five Young Lions Competitions, the Roger Hatchuel Academy and new for this year the Creative Academy for Young Marketers. Yesterday also saw the kick-start of the two-day Beach Soccer Tournament with 16 countries participating.

The 58th Annual Cannes Lions International Festival of Creativity, the largest and most coveted awards in the industry’s calendar is currently taking place in France, attended by 9,000 industry peers.

THE ART OF POSSIBILITY, by the Zanders

“Cannes is a quest for the world’s best creativity”. Craig Davis, Chief Creative Officer, Worldwide, JWT” The industry’s leading figures will gather in Cannes this June to discuss the hottest topics occupying the minds of