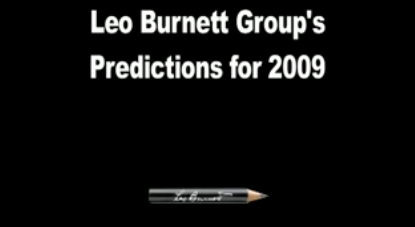 Economic conditions will profoundly affect our
cultural context moving forward. As our creative content becomes more
tangible and honest in reflection, we will be forced to be more
realistic about everything over the coming years. The human story will
be one of value reflection and reassessment, as both our priorities and
purchases are examined in light of what is truly meaningful to us. As
the language of hopes and dreams is replaced by one of pragmatism and
prudence, new value systems will emerge. We will be more open to
expressions that are confident, secure, uplifting, connected, honest
and progressive.

Major developments are
now happening at lightning speed and changing status quos are revealed
in real time with very real consequences. Governments will be judged by
how they manage change and, ironically, by how much they bring about
change itself has become the mantra of modern politics. Businesses will
face major challenges to keep up with and evolve to meet peoples
rapidly changing needs. As economies, societies and cultures are
recast, the need to know whats next has never been greater.

Trust
is set to become a critical success factor for brands in 2009. Where we
place our trust is changing dramatically. In turbulent times we look to
organisations that share our concerns, manage anxiety and take the
lead. With the trust spectrum up for grabs, organisations that show
they are going the extra mile for people will prosper. Supermarkets in
particular have positioned themselves as consumer champions for some
time and look set to benefit in this new era.

Being
green was once costly, time consuming and a matter of conscience. A
major juncture is about to be reached in the future of the planet as
austerity turns the environmental case into an economic one. Energy
efficiency saves money as well as the planet, and the uptake of this
critical message is about to define our future development. The
recession will hijack the green argument, turning it from a moral
argument to an economic one.

While no media
has ever replaced another, TV has been trapped in a corner for some
time. In 2009 we will reach the tipping point for broadcast quality
Internet Television. Yes, people have been watching TV online for some
time, but watching TV on YouTube is not the most satisfying experience
a bit like watching YouTube clips on TV. This year such painful
experiences will become a thing of the past as media neutral TV finally
goes mainstream.

In the future
content will need to be free from central control and tradable in the
new networks – tomorrows Facebook or Bebo. The aim will be not to drive
people to a home page but to scatter diverse pieces of content in
multiple contexts and thread them back to the brand. In this emerging
era unifying ideas, brand logos or simple short codes will form the
threads that link content together. As many adverts already carry URLs,
in the future we will see bus ads linking to desktop widgets, on-pack
promos leading to corporate-led films, and so on ad infinitum.

Video
games used to be the preserve of disenchanted adolescents, but as
gaming becomes a truly mass pursuit, soon we will all be part of
Generation Game. With economic pressures set to encourage us homewards,
the cultural clout of gaming will be further accelerated. The future of
the medium is unlimited as the educational potential and social
networking possibilities of games platforms are further explored.
Gaming will be a fulcrum for future innovation across multiple areas.

The End of Fact

Perceived
wisdom now changes on a daily basis and we should expect more
contradictory opinions and diverse solutions being presented as
definitive. Fact checking is becoming a thing of the past as online
opinions blur the line between truth and hearsay. Authority will
increasingly become a key communication metric and for media
organisations editorial oversight will be a key differentiator. In a
time when truth is more contested than ever, objectivity and
impartiality will become rarefied and more in demand.

Brands
are landing points; we follow our needs and invariably end up at a
brand. This is all set to change. The brands of the future will be
vehicles and not just destinations. The success stories of the last
decade were built on this principle; Google and YouTube being the two
most prominent human gateways. Our journey does not finish with Google
and YouTube, thats where it starts. The days of the static brand are
increasingly numbered, as they become a means and not an end. This is
not just a new economy dynamic; all brands must take heed of this.